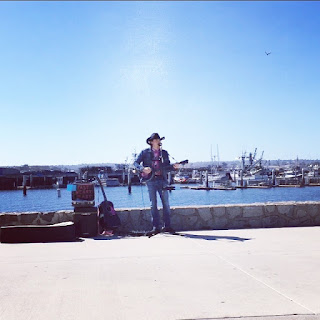 Busking at the San Diego Embarcadero aka San Diego Harbor


My "day job" fell through about 6 months ago, which was August 2016.  It wasn't a surprise because I had been on tour in Europe for 2 months and I had technically quit before going. I wasn't really too upset that my "day job" fell through because I felt I had accomplished my mission as a video producer and editor for the 3 years I worked for the company. I also wasn't upset because after being on tour for two months I was on fire to go back to playing my music full time. However, playing music over in Europe with a booking a promotion agency helping me is totally different than being a full time musician in San Diego.

For the past 6 months I've played at least one promoted show a month, I've played every Thursday night with the Pilgrimage of the Heart kirtan band, I've done a few week long tours and I've done a whole lot of busking in San Diego and I've started giving banjo lessons. These are all music things that I am proud to do because they are on my path. One non-music related thing I still is I still do about 6 hours a week of video editing for the company I was working for before.  Between all these things I've been able to make a living for myself. It also helps that I now qualify for free health insurance through the state of California.  Oh, and I've also driven for the ride share company "Lyft" a little, but I figured out that I can make about the same amount of money busking as I do driving for them, so I usually go busking instead because it's doing what I love, whereas driving people around is not. Check out this post about my history of busking and why I still do it here:
http://fhmbusking.blogspot.com/2017/03/my-busking-history-and-why-i-still-do-it.html

The busking has really come in handy.  In the past 6 months that I've been doing it in earnest here in San Diego I average about $15/hour. That's pretty good. I intend to claim this income for tax purposes, so it'll probably be closer to $13/ hour, but that's still cool with me at this point in my life. Some hours I have made no money at all and some hours I have made way more than $15, but the average is $15, so a-busking I keep going. I should also mention that I sell CDs too and that is included in my calculation of $15/hour.

I am grateful that I have not been harassed by the law enforcement during these past six months, but I did receive a complaint by an old man in at the Balboa Park fountain a few days ago who demanded that I turn off my amp.

"I don't have it on very loud" I assured him "I only have it loud enough to hear myself over the sound of the fountain."

"I don't care. You are breaking the law and please turn it off" demanded the man.

So I turned off my amp. A few songs of no amplification at the Balboa Park fountain and I realized that people paid even less attention to me and I wasn't even sure they could hear me.

So I moved on to my acoustic spots in other parts of the park, but other buskers kept telling me "this is my spot, I have a permit here" except for one named Jeremiah aka "Bandit".

Jeremiah aka "Bandit" was an angel to me that day. I told him what was going on and he told me "don't worry about all those guys, they tried that stuff on me when I first started playing the park too. Jeremiah is called "Bandit" because he is missing half of one of his arms and he is from Las Vegas, Nevada and so his nickname seems to be an allusion to the one armed bandit slot machines.

"Well, I guess I'll go try and find another spot somewhere else" I told Jeremiah.

"Here, take my spot" said Jeremiah. "I'm going to go get Slim's spot when he leaves at 3:30pm anyways. Also, I've already done pretty darn good today, so go ahead and have my spot".

"Are you sure" I said. "Thank you so much man.  Bandit's spot was a pretty good location at the Prado in Balboa Park.

I continue to busk about 3 days a week in San Diego for about 4-5 hours each day I do it. I find that after 4-5 hours I'm exhausted. Some days are great and some are miserable, but I always feel satisfied because I'm playing my music and that's what I really want to be doing. I've literally been down to my last $5 over these past 6 moths and busking has saved me from financial ruin!

There's a saying "A bad day fishing is better than a good day at work". It's true. I'm a full time fisherman now and each day is magical, even if it grueling.

Posted by Fast Heart Mart's blogs at 9:53 AM No comments: 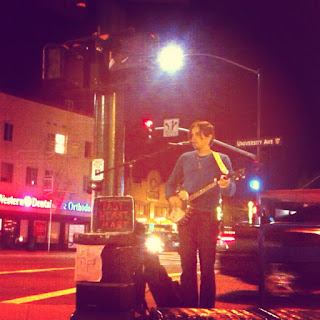 In the year 1999 I was living in Albuquerque New Mexico. I was 22 years old, a college student, I was married and completely broke (financially). "Our little apartment is driving us crazy and I just want to take my wife out for a simple dinner tonight, but I can't because we have no money" I told my friend Jaimal.

"Why don't you go busking at the University with your music?" my friend asked me.

"What's busking?" I asked my friend.

"Busking is when you perform on the street and make tips from people walking by" my friend said.

"That sounds like begging and I ain't tryin' to beg" I said.

"It's not begging, it's making the world a more beautiful place through creative expression" my friend assured me. "You have some great, uplifting, funny songs, why not go get them out in the world and help people with them and maybe get a few bucks in the meantime".

Before this point in my life I had never really performed my songs in public much, at all.  I did not have the confidence in my songs to go out into the world with them. Besides, I didn't even know where to start. I had played about 2 open mics previous to my busking session and they were miserable experiences. I had felt too rushed to get up on stage, after sitting for a long period of time to play. I figured since I failed so miserably at the two open mics I had done that I was not meant to be a musician who performed in public. I figured I was meant to keep my songs to myself.

And so, that day in Albuquerque, I gave busking a try. I took my guitar and harmonica over to the university and did my first busking session. Playing in front of all the passer-bys was super scary at first, but after about 3 songs I got the hang of it. I think I played for a little over an hour that first time and I remember I made about $20 in tips! That was enough to take my wife and I out for dinner!!!

Furthermore, while I was doing my first busking session a man stopped to listen to me. This man was named Bill Feste and he told me that he owned a New Orleans style cafe not far from the university and that he wanted me to play at it. "I can't guarantee you any money, but I will feed you, and your wife, and you we will pass around a tip jar for you to collect money from the people who are there".

That was all I needed to start my career as a professional musician! I dropped out of college that semester. I starting busking about 5 days a week. I began playing in cafes and bars and doing my best to make some money doing what I truly loved, writing and performing songs.

I was voted busker of the Year in Albuquerque for 2008 and 2009.  In 2010 I went through a heavy breakup with my significant other, so I left Albuquerque to ramble the country in my VW Vanagon. I traveled from the East coast to the West coast playing music in cities everywhere in between, including Asheville NC, New Orleans LA, New York City NY, Denton TX, and way too many others to mention.

I've had some magical and crazy experiences busking. The magical includes the smiles that come to people's faces when they hear/see me, the little kids dancing at the sound of their very first ever live music experience, people dancing in the streets to my music, and making enough money to get to the next town. The crazy experiences include being harassed by enlisted soldiers who don't like my views, being maced by cops who were abusing citizens at a busking session, getting three one-hundred dollar bills by a drug dealer who looked he was on the run, and getting thrown out of the world busker's fair in New Zealand... for busking!!! (a story for another time)

I currently live in San Diego, CA. I have lived here for about 5 and a half years. I moved to San Diego because I knew the weather would be conducive to busking almost all year around. However, one of my first busking sessions was thwarted by a rude police officer in North Park who came up to me and sternly said "Put all this away, I want to see your ID. What makes you think you can do this? Do you see anybody else out here doing this?". It was a miserable experience, especially after having been in Albuquerque for about 11 years and hardly ever having a problem with the police.

When I first arrived in San Diego I had a full time job editing and producing videos for an online yoga studio. The job was great, but it came to an end. I was ok with the job coming to an end because I still dreamed of playing my music. One of the reasons I moved to  San Diego was because I knew I wanted to keep on busking and so that's what I'm doing again, I'm busking and getting back to my music full time.

Another reason I don't book conventional venues is because a lot of times I end up staying up too late and drinking alcohol. I'm naturally an early to bed early to rise type of person. My physical and emotional health is way better when I stick to getting up early and going to bed early. I need a lot of sunlight in my life.  Also, alcoholism runs in my family as does depressiona nd anxiety, so I try and stay away from alcohol.

Additionally, I don't like booking and promoting shows. It's a ton of work! I mean, I do it, but I like to focus on making music as much as possible.

I find that I am adequately able to book AND PROMOTE (can't forget about promotion) about one show a month in San Diego now. The rest of my shows are out of town on weekend tours or my big summertime tours that go all over the world.  I busk as often as possible to express myself, enhance people's lives, make money and live free.

There is a magic to busking. Just show up and play to whoever is there, like a songbird on the wind. To me busking is freedom to be a songbird and I still love it after all these years!

Posted by Fast Heart Mart's blogs at 1:52 PM No comments: